We at the Nebraska Public Service Commission (PSC) are working to keep both the citizens we serve and the industries we regulate informed as we adapt to changes presented by the Coronavirus.
Please visit the PSC COVID-19 Information & Guidance page for the latest from the PSC.
We thank you for your patience and understanding as we adapt to this evolving situation

The Commission regulates rates and service quality of investor-owned natural gas public utilities since 2003. Nebraska has two investor-owned jurisdictional utilities providing natural gas services, Black Hills Energy and NorthWestern Energy. As natural gas utilities are natural monopolies, meaning there are no direct competitors due to the costly nature of the infrastructure, the Commission’s regulatory oversight steps in as a substitute for competition while maintaining the efficiency of the company.

Our philosophy is to work collaboratively with jurisdictional natural gas distribution companies and their customers to ensure safe, efficient, reliable and affordable natural gas service in Nebraska.

Deena Ackerman is a 30 year veteran with the State of Nebraska.  Ms. Ackerman has worked tirelessly on behalf of consumers in state government for many years before moving to the Natural Gas Department as the Consumer Advocate in 2017.

A native of Hastings, Nebraska, Ms. Ackerman came to Lincoln and received a degree in business from the Lincoln School of Commerce. Ms. Ackerman has worked for the State Treasurer’s Office, the Legislature and the Secretary of State’s Office before joining the Commission in 2005.

Sallie Dietrich has served as an attorney for the Department since 2018. Ms. Dietrich is a native of Lincoln, Nebraska, but earned a Bachelor of Arts at Cornell University and a Juris Doctor at the University of Minnesota Law School before returning to Nebraska. Prior to joining the Commission, Ms. Dietrich worked in the Nebraska Attorney General’s Office. 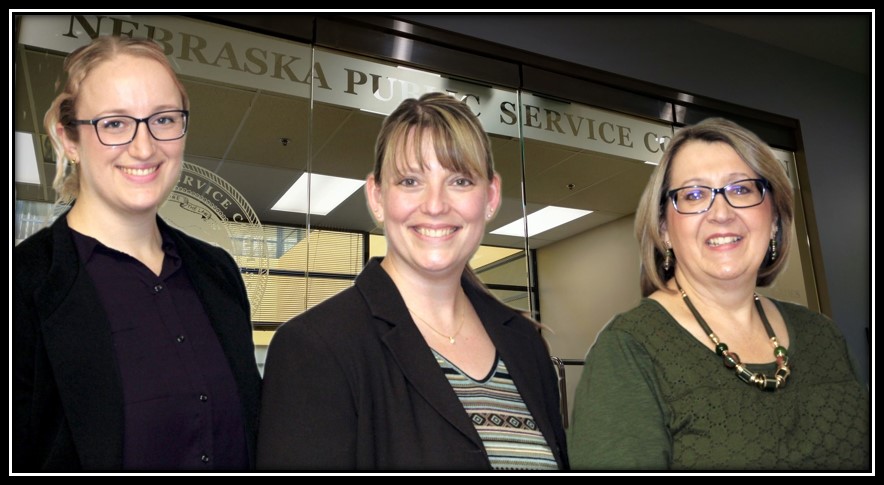 Due to the recent increase in influenza and the COVID-19 virus, the Nebraska Public Service Commission (PSC) staff, including the Natural Gas Department, may be working off-site periodically. Therefore, we ask that all filings, if at all possible be submitted electronically @ psc.naturalgas@nebraska.gov  Exhibit and attachments, including transmission line application exhibits and maps, should be in a format that we can zoom in and review them accurately.

We also urge you to use the Commission's system for online remittance of any fees @ http://tiny.cc/NaturalGasFees

The Commission will have limited access to mail during this time. If you file items via mail, there may be a delay before we are able to process your filings. If you have questions, please email us @ psc.naturalgas@nebraska.gov   We appreciate your patience and cooperation as we all work together to stay well.